Making China and the World Stronger Through Cooperation 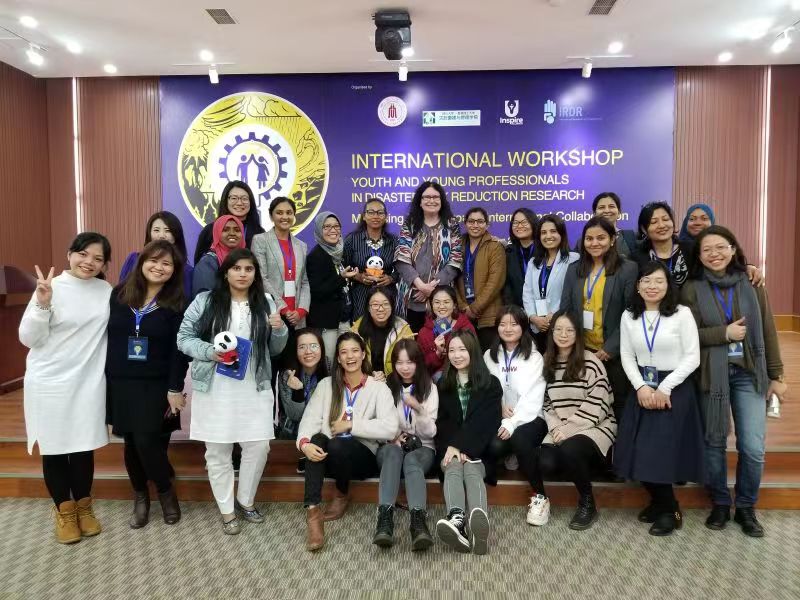 Kalonji with the young women participants in the “International Workshop for Youth and Young Professionals in Disaster Reduction Research”, in Chengdu on 8th December 2019. (COURTESY PHOTO)

Gretchen Kalonji is an American materials scientist and academic administrator. Having previously served as the assistant director general for natural sciences at UNESCO, and in professional roles at MIT, the University of Washington and the University of California, she is currently dean of the Institute for Disaster Management and Reconstruction at Sichuan University, an institute formed in collaboration with the Hong Kong Polytechnic University, after the Wenchuan earthquake of May 12, 2008.

Kalonji recently shared her perspective on China's development, international collaboration, and other related issues with Science and Technology Daily.

Choosing Sichuan University as her research destination was not a random choice. Her connection with China began 23 years ago when she worked at the University of Washington. "We established a very creative program with Sichuan University on environmental science for students from both sides in 1998," said Kalonji. These cooperative experiences and her eagerness for new discoveries contributed to her choice to work in Sichuan.

As an old friend of Chinese people, she is "Happy to live in China, the country that lifted hundreds of millions of people out of poverty." She uses words like  "incredible" to describe China's advancements in the fields of science and technology in particular.

When asked about her views on China's academic environment, she said that China has invested enormously in the sci-tech field and achieved remarkable results. "My opinion is that our universities are the most creative part of society. And we need to focus on how to unleash the creative energies of our students," she said, adding that promoting interdisciplinary research and drawing in more international experts are critical to create academic communities that are both more robust and innovative in China.

She also believes that China needs to further strengthen "connections between industry and universities" in order to effectively and promptly deliver research results to society.

Diversity is a word frequently used by Kalonji. "In my professional life, for many years, the challenge is to make our professional communities more diverse," she said, adding that she spent many years in her early career in the U.S.trying to get more women and ethnic minorities involved in science, in programs funded by the US National Science Foundation.

As a child, Kalonji said she had a strong interest in science. She was a self-taught inventor who built her own chemistry lab. Her decades of international work and personal experiences have shaped her into an unbiased observer of the science and technology field.

She devotes considerable attention to promoting equitable participation of women in the scientific and engineering workforce. From her perspective, China could make the most of its "strategic advantage" to promote female participation in the sci-tech field, through its capacity to design and implement national level policies relatively quickly and effectively.

Kalonji said that we all know that our Chinese girls do extremely well in the early stages of the sci-tech pipeline, including in the gao kao (China's College Entrance Examination), and in undergraduate education performance.  However, as they move up the career pathway, in PhD programs and in entry and high-level positions in universities and research institutes, the relative participation of women becomes dramatically reduced.  She hopes Chinese women scientists get full and equitable participation  in all stages of their career development.

Speaking of international cooperation, she emphasized that the U.S. and China are two major economies of the world with "deep historical connections." At the same time, she urged the U.S. and China to work together to cope with common challenges, such as climate change, disaster risk reduction and other fields, adding that advancing human progress needs to be achieved through multilateral cooperation, not just limited to exchanges between the U.S. and China. In her current role, in which she is based in China but collaborates with colleagues in research and educational institutions worldwide, she has found a great deal of fulfillment.

In addition to her professional ties to China, Kalonji has personally formed a strong attachment to China. She joked that Sichuan may now be her "first home." She said that what impresses her most is that Sichuan is a multicultural society within China, with many minority groups living harmoniously, not to mention wide diversity in landscapes.

In terms of her future plans, Kalonji said she will continue to work on disaster risk reduction (DRR), with a homebase in China. She stressed that DRR is a subject intrinsically linked to almost all of the sustainable development challenges facing our societies worldwide. She will continue to focus on strengthening international collaborations between Chinese institutions and international partners on disaster risk reduction and response.  Her second major focus will be to continue to work on innovations in the Chinese higher education system. "Make China stronger while also making the rest of the world stronger in collaboration with China," said she.  In 2021,  Kalonji received the Chinese Government Friendship Award, the highest honor given by China to outstanding foreign experts working in China.